As lizards before the hurricane fly: A new study in the journal Nature gives a graphic demonstration of natural selection in action. It’s about Anole lizards living on islands in the Caribbean and how they survived – or not – two violent hurricanes in 2017.

Thomas Schoener, professor of evolution and ecology in the UC Davis College of Biological Sciences, is a coauthor on the paper. Schoener has extensively studied these lizards and other animals on small Caribbean islands as models for evolution and natural selection.

In August 2017, Colin Donihue of Harvard University and colleagues were carrying out a survey of the Anolis scriptus in the Turks and Caicos Islands. Donihue is interested in how efforts to eradicate rats from the islands are affecting the native iguanas and lizards. 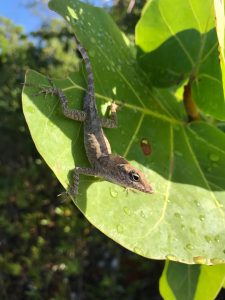 Just as Donihue’s team was finishing their survey, Hurricane Irma was bearing down on the island. They watched from afar as first Irma and then within a couple of weeks Hurricane Maria pounded the islands with winds of over 150 miles per hour.

The storms’ destruction, they realized, was an opportunity to see how such violent natural events affect the lizard population they had just studied. Anoles live in trees, and they reasoned that lizards with larger toepads and longer limbs would be best able to hang onto branches and avoid being blown away.

The researchers decided to return to the islands in the storms’ wake. In case they needed to run some lab tests, they also packed an electric leafblower.

When the team sampled lizards on the islands, they found that the storm survivors did indeed have bigger toepads and longer front limbs but had shorter hindlimbs than expected.

That’s where the leafblower comes in. They set up an experimental perch and video recorded how lizards behaved in a strong airflow (any lizards blown off the perch were safely caught in a net). 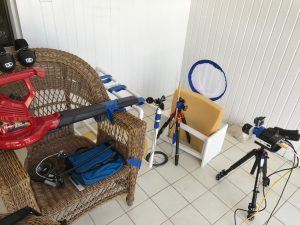 What they found is that when the wind rises, the lizards do indeed cling tight to the branch rather than scurrying down for shelter on the ground (which would likely expose them to predators). But when the lizards lose their grip, they usually do so from the hind limbs first, because their hind limbs tend to stick out a bit and catch the wind. Larger limbs provide more surface area to act like a sail.

In a blog post, Donihue wrote that “We’ll need to get lizards into a wind tunnel and more rigorously test different perch diameters, angles, and positions to fully understand all the effects morphology has on survival in high winds.”

The serendipitous study may lay the groundwork for future studies on the evolutionary effects of hurricanes, Donihue wrote.

To view the 'Natural selection in a hurricane: The lizards that won't let go' video, click here.

Hurricane-induced selection on the morphology of an island lizard (Nature)

Behind the paper: Hurricane-induced selection on the morphology of an island lizard (Colin Donihue’s blog)

This story originally appeared on the UC Davis Egghead Blog

Supporting Your Success, From Start to Finish